The idea of a sport fishing club based in Waiuku was first considered when a meeting of interested people was held on Aug 23rd 1989 with 80 people attending. A steering committee was formed and the 1st general meeting was held on 20th Sept 1989 to formally launch the club which was then named the West Coast S.F.C. The aims of the club were to promote safety awareness on the West Coast, Manukau Harbour and Waikato River bars.

To promote conservation and friendly competition and to keep members informed of the latest techniques and happenings in the fishing world. A name change came in June 1990 and the club was renamed 'Counties Sportfishing Club' as it is still known today. On Nov 30th 1991 (after serving a years probation) the club was admitted to the NZSFC. In Dec 1992 the club purchased it's own V.H.F. Channel 5. The repeater equipment is set up on the Port Waikato Hills, giving us wide coverage. The club adopted minimum safety standards for all boats fishing off the West Coast and boats weighing in gamefish run the risk of disqualified fish if the boat doesn't comply.

A high standard was reached at the first boat check day and has been kept up since. In Nov 1994 the club became a member of the I.G.F.A. and also the Pacific Ocean Research Foundation. The club boasts several NZ records, mainly sharks. 1999 had to be one of our best years with many anglers not only fishing the West Coast but also travelling the country to fish. 71 Billfish caught with 81% tagged; also 2 Wahoo (1 an NZ record) And 7 Y/fin. The club has grown steadily over the years, We currently have around 700 members. 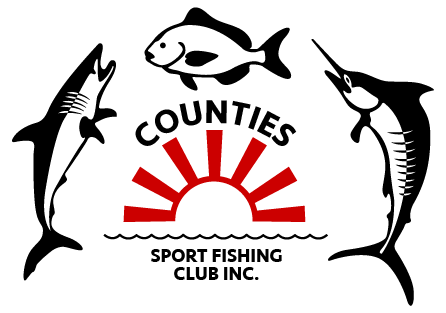